I went over to Montrose this afternoon to see the wave action on Lake Michigan from the storm that went through. I’ve lived in Chicago all my life and I’ve seen some impressive weather but this storm has to rank near the top in terms of violence and intensity. A large part of the dunes at Montrose Beach was flooded. At times part of the fishing pier was under water. Waves were crashing 20-30 feet high against the fishing pier. Lake Michigan was roiling. I even saw a few birds, including a Northern Harrier flying south over the lake. 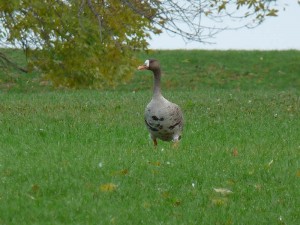 The adult Greater White-fronted Goose was still at Montrose this morning, October 16. I first saw it in the lake with Canada Geese south of the restrooms, and I saw it again with Canada Geese on the grass just east of the bait shop as I was driving out.

I also walked around the point for a little while and there seemed to be good numbers of passerines around, especially White-crowned and White-throated Sparrows. Some of the other birds I saw include:

I had a Nelson’s Sparrow in the meadow at Montrose this afternoon, October 7. The meadow is the open grassy area east of the Magic Hedge. At this time of the year the dunes are the best place to see Nelson’s at Montrose but they occasionally show up in the meadow as well. I saw nothing else of note.

There were decent numbers of birds at Montrose this morning, especially Palm and Yellow-rumped Warblers and both kinglets. I also had Magnolia, Tennessee, Black-and-white, and Black-throated Green Warblers, American Redstart, and Bobolink among others. I saw a Nelson’s Sparrow in the meadow east of the Magic Hedge, my first Nelson’s of the fall. The American Golden-Plover was still at the beach along with 5 Black-bellied Plovers.