I spent a couple hours at Montrose this morning, November 24. I saw very little of interest, the highlight being 3 southbound Black Scoters. Typically at this time of the year one can expect to see loons, grebes, and a variety of waterfowl resting on Lake Michigan or flying by. I saw no loons, a couple Horned Grebes, and except for the scoters only Red-breasted Mergansers on the lake. November is the best month of the year for rare and unusual species, but the extended period of mild weather for the first 3 weeks of the month made for slow and unremarkable birding. Indian Summer does not do a fall birder good. Bring on the Arctic fronts. Link to my meager and unimpressive eBird checklist below. 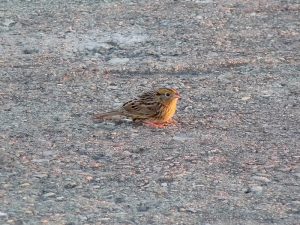 I’ve had some weird birding experiences, but this morning’s encounter with an out of place Le Conte’s Sparrow has to rank as one of the strangest. I was walking on the fishing pier when about two-thirds of the way out I noticed a small bird standing on the concrete just ahead of me. If you’ve been to the fishing pier you know that it doesn’t offer much in the way of cover, plus it’s surrounded by Lake Michigan. Not the most desirable habitat for a migrating passerine. The bird was holding perfectly still; if I wasn’t looking down I may have stepped on it. At first glance I thought it was a Golden-crowned Kinglet, but upon closer scrutiny it turned out to be a Le Conte’s Sparrow! There, on the concrete, exposed and in the open, was a bird known for its skulking habits, a bird that can be frustratingly difficult to see well. It was alert and seemed healthy, so I’m guessing it came in off the lake after a night of migration and plunked down on the pier because that was the first “land” it encountered. I’m also guessing the 2 Peregrine Falcons patrolling the beach were why it was holding so still and why it was reluctant to fly. I took a few pics before turning around and walking back.