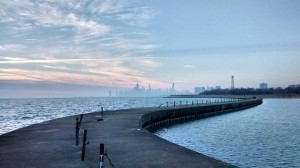 I birded Montrose for about an hour this morning, December 6. Most of that hour was spent at the end of the fishing pier looking at Lake Michigan. Except for Red-breasted Mergansers not much was moving, though I did have 3 northbound White-winged Scoters. There wasn’t much on the lake either; I guess most of the expected winter waterfowl are still to the north of us and will come down with colder weather.

When I was done looking at Lake Michigan I walked over to the harbor to look for the Long-tailed Duck, and after a little searching found it in the channel between the docks at the east end of the harbor, pretty much where it’s been since it first showed up.