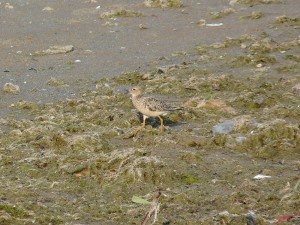 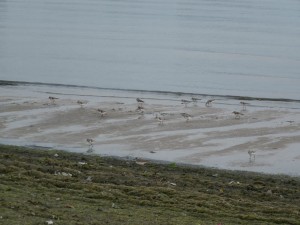 Shorebirds and Algae (click to see the larger version)

Green gunk has returned to Montrose Beach. Green gunk is just algae that has washed up and accumulated on the beach. Shorebirds love to feed in this stuff. This morning, July 26, there were ~30 Sanderlings, ~6 Semipalmated Sandpipers, a fresh juvenile Least Sandpiper, 4 Semipalmated Plovers, plus the local Killdeer and Spotted Sandpipers feeding in the gunk inside the protected area at he east end of the beach.

Part three of a six part series on my trip to the west and southwest in April, 2014

On April 19 Karen and I birded Sandia Crest, at 10,678 feet the highest point in the Sandia Mountains of northern New Mexico. We were joined by Albuquerque resident and fellow birder Carol Davis, who was kind enough to guide us up and down the mountain. Birders know Sandia Crest as one of the most reliable places in North America to see all 3 species of Rosy-Finch in winter. We were about a month late for Rosy-Finches but we had a great time anyway, and the view of Albuquerque from the top is nothing short of spectacular. Most of the birds we saw were typical Rocky Mountain species – Mountain Chickadees, Steller’s Jays, Broad-tailed Hummingbirds, Red-naped Sapsuckers, “Gray-headed” Dark-eyed Juncos, and “Audubon’s” Yellow-rumped Warblers. We also saw our first Grace’s and Black-throated Gray Warblers of the trip. The highlight however were the 3-4 American Three-toed Woodpeckers near the summit. I’ve only seen American Three-toed Woodpeckers twice before so it was a treat to see and hear so many in such a short period. One bird was exceptionally cooperative, almost tame, and let us approach to within a few yards. The American Three-toed Woodpeckers that occur in the Rockies belong to the Dorsalis subspecies, which has a solid white stripe down the back instead of the barred back of eastern American Three-toeds.

After Sandia we started driving south through central New Mexico. I’ve only birded the edges of New Mexico before but on this trip we were driving the length of the state from north to south, right through the heart of it. Like Colorado, New Mexico wasn’t short-changed when it comes to scenic beauty.

Bosque Del Apache National Wildlife Refuge is located along the Rio Grande River in central New Mexico and is known for its wintering Sandhill Cranes and Snow Geese. We were too late for the cranes and geese but the pools inside the refuge held numerous waterfowl, including Northern Shovelers, Blue-winged and Cinnamon Teal, Gadwall, Lesser Scaup, and Ring-necked Ducks. The water level in the pools was too high for shorebirds but we did have a few American Avocets, Wilson’s Phalaropes, and White-faced Ibises. The diversity of flycatchers on our trip increased dramatically at Bosque. Through Colorado and into northern New Mexico the flycatchers were limited to Say’s Phoebes and a Black Phoebe or two. At Bosque we started seeing Western Kingbirds in numbers, and our first Ash-throated and Vermilion Flycatchers of the trip. More Say’s and Black Phoebes too. There were also raptors, mostly Swainson’s Hawks and Northern Harriers, and a bonus Golden Eagle. The feeders at the refuge headquarters were full of White-crowned Sparrows.

Our last major stop on our way south through New Mexico was Percha Dam State Park. I read about Percha Dam State Park in the “New Mexico Bird Finding Guide”, and Carol Davis, our guide at Sandia, talked (and raved) about the place. Percha Dam State Park is located along the Rio Grande River in southern New Mexico between Truth or Consequences and Las Cruces. What makes it so special from a birding perspective is its lush riparian woodland and undergrowth, a habitat that has become rare along the Rio Grande in southern New Mexico. As such Percha acts as a migrant trap and oasis. It was full of activity when we birded it on the morning of April 20. We had numerous White-crowned Sparrows, a few White-throated and Lark Sparrows, Summer Tanagers, Bullock’s Orioles, a Blue Grosbeak, Wilson’s, Lucy’s, “Audubon’s” Yellow-rumped Warblers, Bewick’s Wrens, our only Phainopepla of the entire trip, and our first Verdin. Flycatchers were well represented too, with numerous Western Kingbirds, a few Vermilion and Ash-throated Flycatchers, and Say’s and Black Phoebes. The Rio Grande at this point is reduced to a few isolated pools of water but these pools had Northern Shovelers, Cinnamon and Blue winged Teal, Gadwall, and what seemed like an out of place Willet. We also had Gambel’s Quails and White-faced Ibises flying overhead. 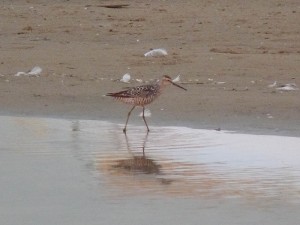 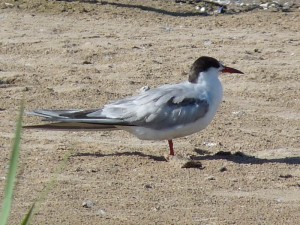 An immature Common Tern was at Montrose Beach on July 2 and 3. The bird is probably in its second calendar year and can be identified as a Common Tern by the dark feathering on the leading edge of the inner wing (the so-called carpal bar) and the dark red base to the bill. Common Terns are very unusual at Montrose at this time of the year. 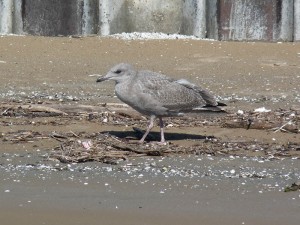