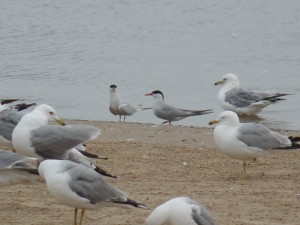 Two adult Common Terns were inside the protected area at Montrose Beach this morning. Both birds flew off to the west after a few minutes and were not seen again. This is a most unusual record. Other birds seen or heard at Montrose this a.m. include a southbound Great Egret, 2 Eastern Wood-Pewees, and a buzzing Dickcissel.

I saw a Grasshopper Sparrow near the water feature early this morning. The bird flew towards the meadow and I never saw it again. A little late and a little unexpected I’d say. I also heard and saw a Great Crested Flycatcher.

On a side note, some of you may have noticed that the eastern portion (specifically, the eastern panne) of Montrose Dunes has been cordoned off with yellow rope. This was done to protect the vegetation from trampling and disturbance. I know the dunes are popular with birders seeking Nelson’s Sparrows and other birds but the disturbance to this area has become so extreme that cordoning it off became necessary. Please don’t enter this area if you bird the dunes and stay on the footpaths to minimize damage to the vegetation. 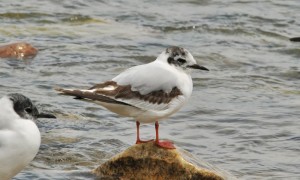 Karen Mansfield and I had at least 3 first year Little Gulls along the Sheboygan, Wisconsin lakefront on Saturday, June 1. The Little Gulls were associating with Bonaparte’s Gulls at North Point Park. Sheboygan is perhaps the most reliable place to see Little Gulls in the western Great Lakes region.

In addition to the Little and Bonaparte’s Gulls we also had 20 or so Forster’s Terns, a couple Common Terns, and a first year Franklin’s Gull.

An adult or near adult Laughing Gull was at the east end of Montrose Beach this morning, June 13. Unfortunately the bird flew off to the south just after I identified it. I also saw a female American Redstart. The Red-winged Blackbirds are in kamikaze mode now, so watch your back.

Well, spring migration isn’t over just yet, but it’s really close. There might be one last pulse of migrants with the south winds and warmer weather forecast for Tuesday and Wednesday. This morning I had singing Wilson’s and Magnolia Warblers, a female American Redstart, and a Great Crested Flycatcher. I also heard what were probably Alder and Willow Flycatchers calling. I usually keep birding Montrose for the first 10 or 15 days in June for late migrants and stragglers. Who knows, maybe a Fork-tailed Flycatcher or Brown-chested Martin will show up.