Several Long-eared Owls are attempting to overwinter at Montrose. If you look for them, please be discreet and exercise proper etiquette – give them plenty of space, be quiet, and don’t linger. These owls disturb easily and should be resting during the day. If they’re flying around, someone probably got too close and flushed them. Also remember to stay on trails and paths and out of roped or fenced off areas.

We’ve had a good fall and early winter for both Long-eared and Short-eared Owls at Montrose. Multiple birds have been recorded during this period, though Short-eareds were and usually are more numerous. This Long-eared Owl looked comfortable roosting in a stand of cedars. It’s hard to say if this individual is a recent migrant or an overwintering bird that’s been around for a few weeks. December 22, 2022.

Almost every square foot of Montrose Beach has Zebra or Quagga Mussel shells. These invasive, non-native mollusks have altered the ecology of Lake Michigan and created problems for commerce. It’s hard to believe something so small can create so much trouble for people and the environment. One positive aspect of their presence is that they provide food for several species of duck, like Common Goldeneye and Greater Scaup.

The photo shows a presumed Zebra Mussel shell. The shell is bleached from exposure to the sun and blowing sand, but you can still see how this species got its name. The next time you’re at Montrose Beach, try finding both Zebra and Quagga Mussel shells. The Nature Spot website has a great section on how to identify the two. 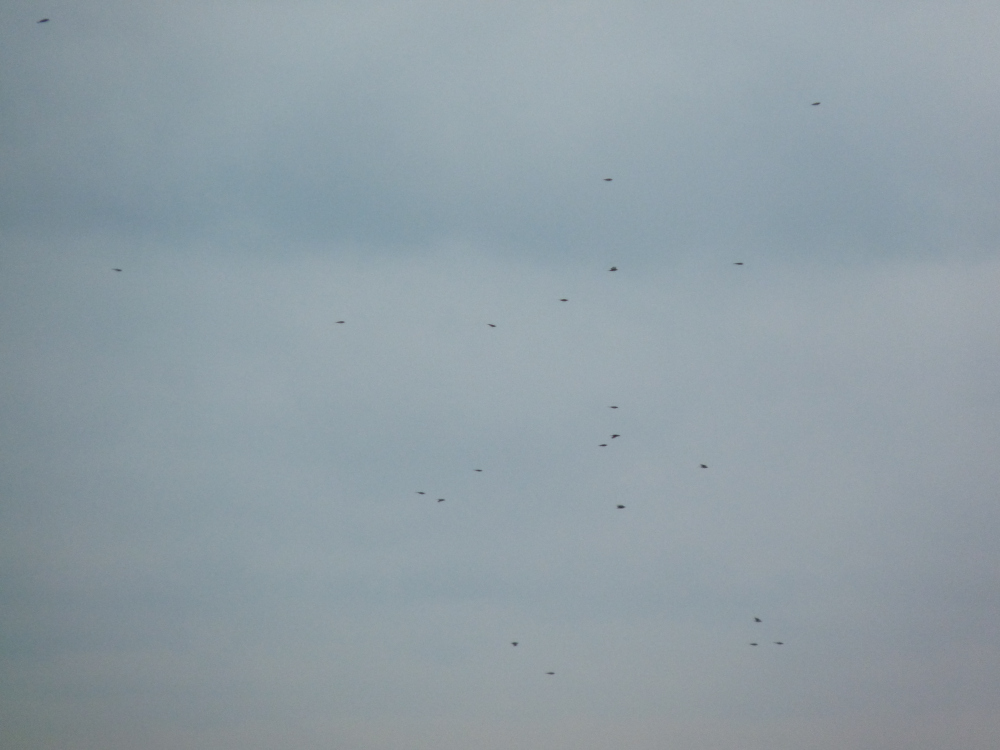 A large movement of Lapland Longspurs took place at Montrose on the morning of December 15. Multiple flocks totaling about 150 birds and ranging in size from a handful to 60 made their way south over the Point and Lake Michigan. Some were far offshore and just a few feet above the water. This isn’t unusual in late fall and early winter, but the numbers are. Interestingly, these birds were flying into a strong southwest wind, which seems counterintuitive, especially considering how small longspurs are. Flocks of Lapland Longspurs are fairly easy to recognize – loose groups of sparrow-like birds with a noticeable bouncy flight.

Does migration ever really end? It’s down to a trickle at Montrose, but as of mid December we’re still seeing birds that can justifiably be called migrants, like these Lapland Longspurs. The only time migration isn’t easy to detect, at least here in Chicago, is the period from mid January to early February. 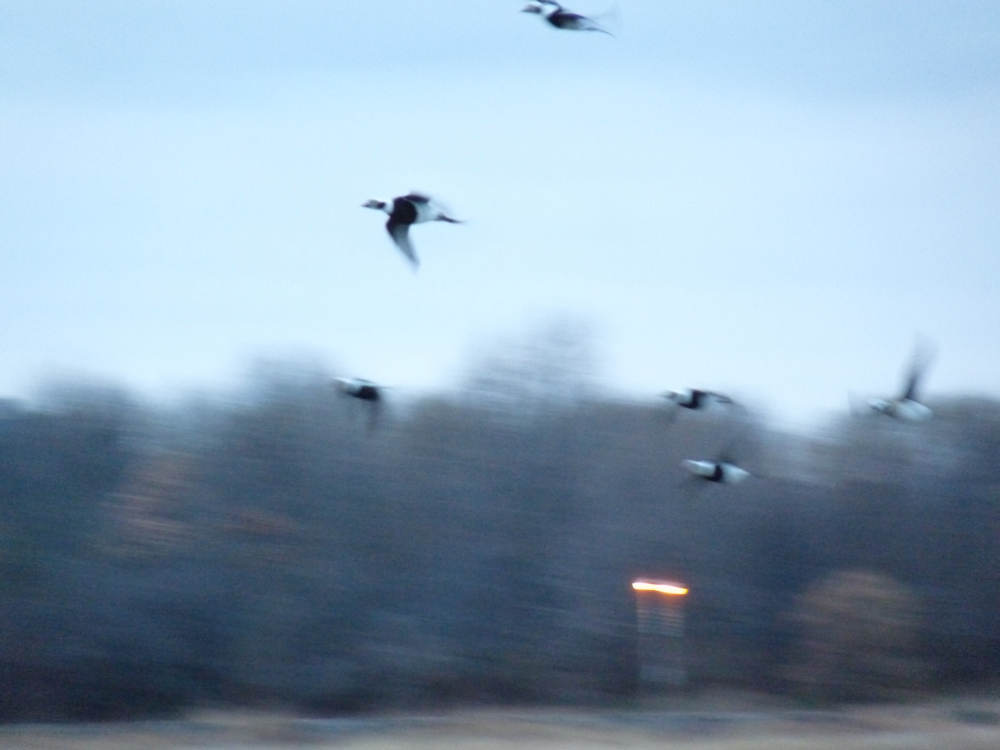 On December 8 a group of six Long-tailed Ducks put on an air show worthy of the Blue Angels. The birds flew in a big circle low over the fishing pier, beach, and against the Chicago skyline. Most were strikingly plumaged adult males. Seeing this many Long-tailed Ducks so close to shore is unusual. More photos are at my eBird checklist for the morning, URL below. 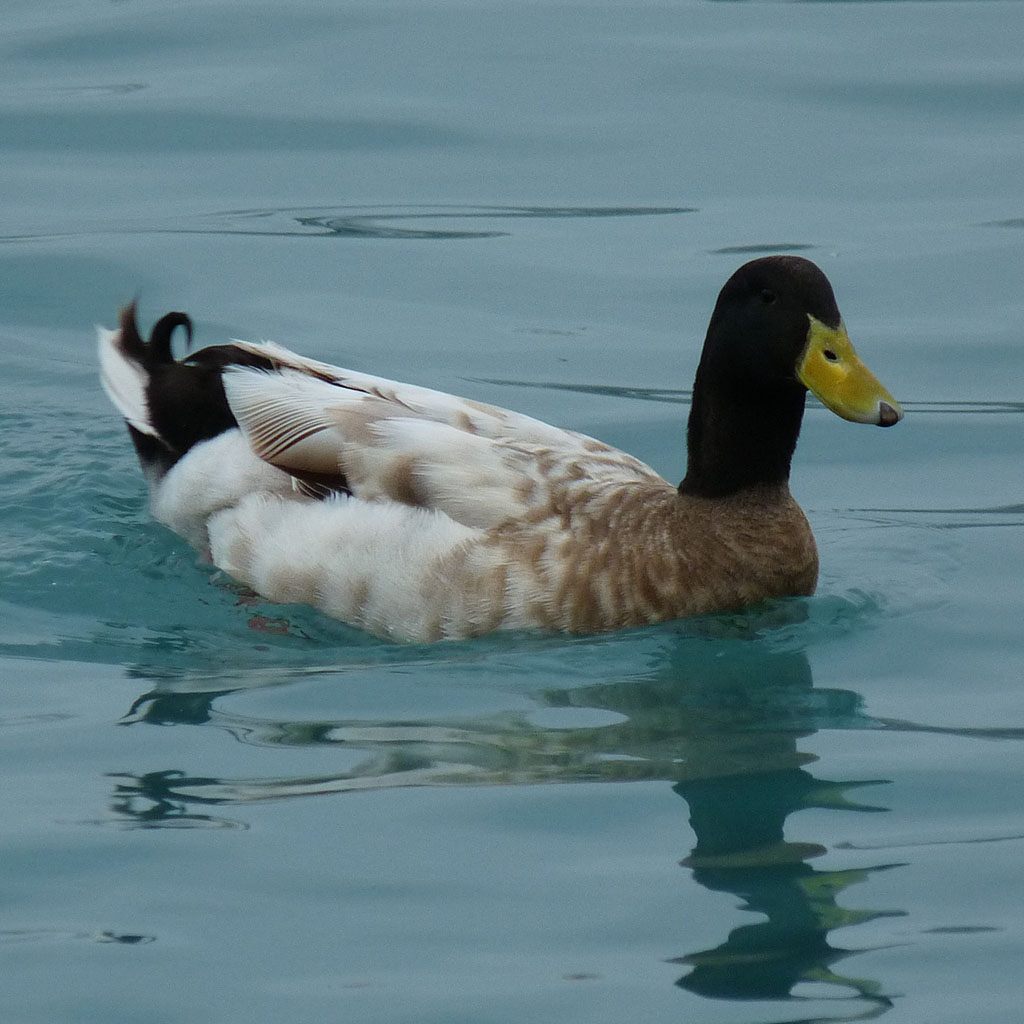 This is Pale Male (yes, I gave him that name), a domesticated male Mallard that’s lived in Montrose Harbor for a couple years. Since he can’t fly, someone probably dumped him at Montrose thinking he would be ok. Turns out that was a good call. Pale Male fit right in with the wild Mallards and hasn’t looked back. Pale Male is easy to pick out – look for a larger and paler Mallard with the local Mallards in Montrose Harbor.

Human beings like to mess with nature (by mess with I mean manipulate it for our own needs). This messing can be for aesthetic reasons, like the cultivated flowers in your garden. It can also be for more practical reasons. We select some animals for certain traits like larger size so these animals produce more meat. The familiar Mallard has been the subject of human-directed selection for increased size. Nature plays with genes and so do people.