How do I bird it?
The best birding areas, including the Magic Hedge and Montrose Dunes, are to the east and northeast of the main entrance on West Montrose Harbor Drive. A series of well-marked foot trails and paths wind through the area. You can walk any trail but don’t enter areas that are roped or fenced off. Feel free to wander around and explore. Finally, consider checking some of the under birded areas at Montrose, like the north end of the Marovitz Golf Course and perimeter of the boatyard just north of the harbor.

How’s the parking?
The parking is generally good in the morning but deteriorates in the afternoon, especially on weekends, and especially in the summer. During the warmer months of the year, runs, charity walks, and other events take place at Montrose, further complicating traffic and parking. If you do drive, DON’T park directly under the light posts as these are used by the resident pigeons and gulls for roosting, and you may find an unpleasant surprise on your car when you get back.

Is it safe?
There is very little crime at Montrose though you should still be discreet and remember to roll up your windows, lock your car, and take your valuables with you. Also, securely lock your bike if you’re biking, but see the next entry.

Is there someplace I can lock my bike?
There are bike racks by the beach house and by the handicapped parking lot off of West Montrose Harbor Drive. Don’t lock your bike to a tree or to one of the metal signposts as these aren’t secure. Note that bike riding is not allowed in any of the nature areas at Montrose.

Is there any place to eat nearby?
The Dock restaurant at the west end of the beach house offers food and beverages during the summer. There’s also a small concession stand on the southeast side of the harbor that’s open during the summer. It’s a good idea to bring water and snacks for what may prove to be an extended birding stay.

Are there restrooms nearby?
The restrooms closest to the birding areas are in the beach house and just to the west of the red concession stand on West Montrose Harbor Drive. Unfortunately, these restrooms are only open during the official beach season, which runs from Memorial Day to Labor Day. There are also portable toilets at the north end of the harbor, just west of the Chicago Corinthian Yacht Club, and at the south end of the harbor near the turnaround. Both are within easy walking distance of the Magic Hedge.

Are there any poisonous plants or dangerous animals at Montrose?
There is Poison Ivy in scattered places, so watch where you walk or put your hands. There are no venomous snakes or ticks at Montrose, though in summer the biting flies can be vicious. For this and other reasons wearing short pants is not recommended.

Are dogs allowed?
Dogs are not allowed in any of the nature areas, including Montrose Dunes. Dogs are only allowed in the designated dog area at the west end of Montrose Beach. The penalty for violators is stiff (a $300 ticket), so you would be wise to respect the dog ordinance.

Is there anything I shouldn’t do or anyplace I shouldn’t go at Montrose?
The Magic Hedge and certain other areas have been roped or fenced off to discourage cruising and to protect the plantings; if you enter these areas, even if you’re just birding, you could be arrested! Also, if you walk through areas with dense cover you might see something you don’t want to see. These areas are used by gay men for casual sex.

You should take special care when birding Montrose Dunes as this special habitat contains many unusual and delicate plant species that are easily crushed. In addition to migratory birds, there are several bird species that use the Dunes vegetation for nesting. Please respect the native plants and birds by staying on the trails and walking around and not through the vegetation. Also take care when approaching the shoreline, as you may flush resting and feeding birds.

Please do not litter, and remember to carry your trash out with you as there are no garbage cans in the natural areas. You may also wish to pick up any litter that you see, as good stewards of these beautiful sites.

Map of Montrose Point
(Click to see the larger version) 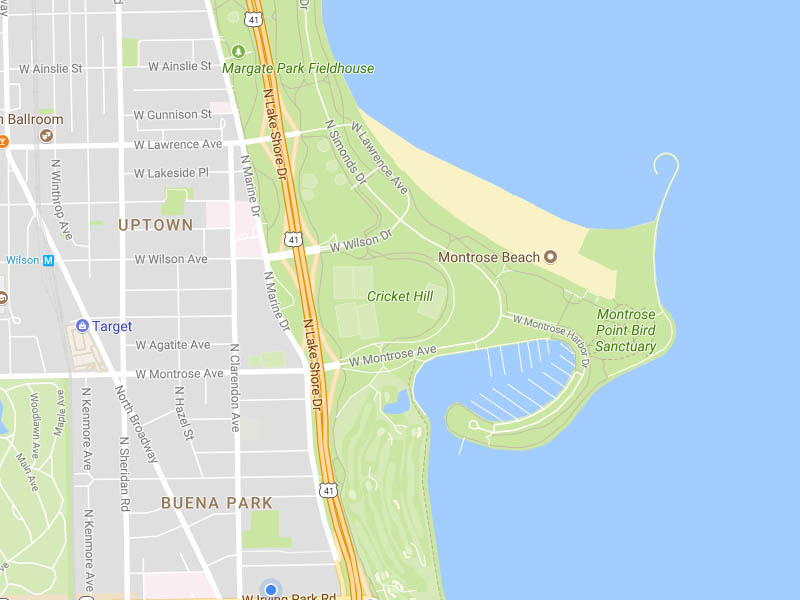