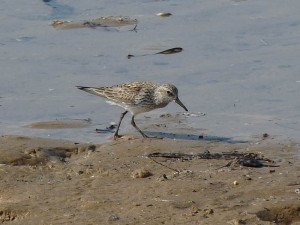 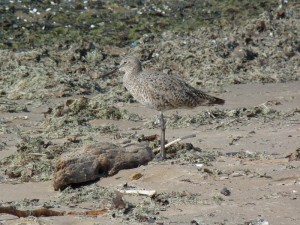 Willet at Montrose Beach (click to see the larger version)

I had 13 species of shorebirds on my May 8 Big Day, which helped bump my total to over 100. My 100th bird was this Willet, which I saw when I went back out in the afternoon. Willets are uncommon but regular spring and summer visitors to Montrose Beach.

I did a Big Day at Montrose on Thursday, May 8. This is the first Big Day I’ve ever done there. I’ve wanted to do a Montrose Big Day for a while but I either didn’t have the time or the weather wasn’t right. Today was different. I had the time and the weather cooperated. Last night’s south winds brought in a lot of birds, which is critical because doing a Big Day at Montrose depends almost entirely on migrants. I had no stake outs waiting for me, but there were a ton of migrants to work with. The only difference between today and any other day I bird Montrose is that today I 1) stayed longer and 2) paid close attention to every single bird I saw. I started at 5:30 a.m. and had to leave at 10 a.m. I went back out in the afternoon between 4 and 5 to check the beach for gulls and shorebirds. So I put in 5.5 hours, which is meager by Big Day standards. The area I covered included the beach, dunes, meadow, Magic Hedge, peripheral plantings, and east end of the harbor, and I walked between these areas. I ended up with 99 species in the morning and added 4 more in the afternoon for a total of 103. Here’s my list:

I had decent shorebirds for the day. Going back out in the afternoon actually pushed my total to 100, the Willet being #100. Passerines were fairly strong in general, especially sparrows, and especially White-crowned Sparrows. Catharus thrushes were well represented too. I ended up with 17 species of warblers and I had to work hard for most of them. None were abundant. Vireos were poorly represented and wrens weren’t much better. You always miss things on Big Days though. Still, I think 120 is possible at Montrose on an exceptionally good day in May.