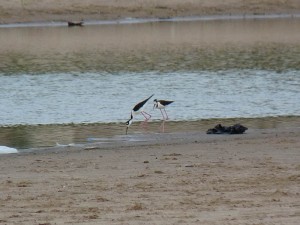 The 2 Black-necked Stilts seen on May 27, 2016 represent just the second record of this species for Montrose (the first occurring in May 2015). Black-necked Stilts have been moving north for a couple decades and now breed in Illinois, so the recent sightings from Montrose aren’t surprising.

I spent a couple hours at Montrose this morning, May 27. Most of the passerines from earlier in the week must have flown north with the south winds, which isn’t surprising. The waterbirding however was much better. Two Black-necked Stilts and 2 immature Franklin’s Gulls were on the beach early in the morning. The stilts were in the fluddle on the beach, working west and feeding along the way. They flew to the east and disappeared after a little while. The Franklin’s Gulls didn’t stay long either. Black-necked Stilt is an accidental species at Montrose, with just one previous record.

The real excitement came when a group of Double-crested Cormorants flew over that contained a noticeably smaller cormorant. We could tell the bird was brownish, so it was probably an immature, and based on size likely a Neotropic, a species unrecorded at Montrose. The bird was too far away and the flock was moving too fast to make out any other plumage features. I’m not going to add it to the list of birds seen at Montrose because of the distance involved but I think it was a Neotropic.