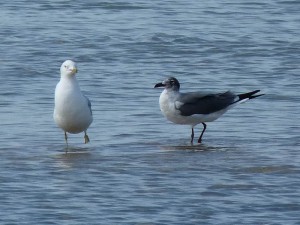 The 2 American Avocets found this morning (May 28) at Montrose Beach were still there as of 4:30 p.m. Both birds were in the fluddle just west of the beach house. I also had an adult Laughing Gull in the fluddle in the same area as the avocets. A couple kids flushed the bird but it relanded and joined a group of Ring-billed Gulls near the volleyball nets.