I spent about 45 minutes scanning the lake and beach from the fishhook pier at Montrose early this morning. Shorebirds continue to be few and far between. The best I could manage were 1 Semipalmated Plover, 1 Spotted Sandpiper, and a heard only Greater Yellowlegs. Just after dawn I had 2 Osprey fly south over the point. One of these came in off the lake and flew low, right over the beach. I also had about 6 bats come in off the lake. This is the time of year to see migrating bats at Montrose.

Part four of a six part series on my trip to the west and southwest in April, 2014

On April 20 Karen and I arrived in the Chiricahua Mountains of southeastern Arizona. We spent five days there, most of that time in the South Fork of Cave Creek Canyon. We also took a side trip up to Barfoot Park, over to Wilcox on our last day to check Lake Cochise for shorebirds, and a couple other places nearby. We made daily trips down to Portal for food and to check the feeders in town. I’ve birded the Chiricahuas before, but never for more than a day or two, so I was excited about spending quality time exploring these mountains, the ancestral home of the Chiricahua Apache Indians. We were also tired of driving and wanted to relax and enjoy ourselves. Between all the hiking and birding we really didn’t relax but we did enjoy ourselves. Relaxing in the the Chiricahuas probably isn’t an option if you’re a birder. Birding there is like being a kid set loose in a toy store. 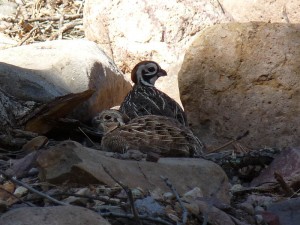 The Chiricahuas are located in the Coronado National Forest and offer some of the finest birding in the United States, specializing in species that are largely Mexican in distribution, like the other border range mountains of southeastern Arizona. The birds that we heard and saw on our daily hikes in Cave Creek Canyon include Black-throated Gray and Grace’s Warblers, Painted Redstarts, Acorn and Arizona Woodpeckers, Mexican Jays, Scott’s Orioles, Dusky-capped and Ash-throated Flycatchers (Dusky-capped were the most common Myiarchus), Plumbeous Vireos, Hepatic Tanagers, Canyon Wrens, and Bridled Titmice. Many of these birds were around our campground and a little pishing or a Northern Pygmy-Owl impression often brought the Black-throated Gray Warblers and Painted Redstarts right in. We also had Magnificent and Blue-throated Hummingbirds, Hutton’s Vireos, a few Brown-crested Flycatchers, Townsend’s Solitaires, and Bewick’s Wrens. Higher up in the canyon we had Red-faced Warblers and Yellow-eyed Juncos. Migrants warblers included Townsend’s, Wilson’s, and Orange-crowned. In addition to the Sierra Madrean/Western species we had some familiar friends – American Robins, White-breasted Nuthatches, Hairy Woodpeckers, House Wrens, Ruby-crowned Kinglets, Brown Creepers, and Hermit Thrushes. At night we were serenaded by Whiskered Screech-Owls (camping does have its benefits). Some of our better finds in Cave Creek Canyon were Buff-breasted Flycatcher, a male Elegant Trogon, and a pair of Montezuma Quail that flushed almost underfoot along the trail, scaring the hell out of us. The trogon was probably the birding highlight of our time in the Chiricahuas and we both did a happy dance after seeing him.

On April 21 we drove up to Barfoot Park to look for, among other birds, Olive Warbler and Mexican Chickadee. The habitat at Barfoot is decidedly Rocky Mountain in character and unlike the drier Sierra Madrean pine and oak forest found lower down. Olive Warblers can be found in other mountain ranges in Arizona but Mexican Chickadees are found only in the Chiricahuas (Mexican Chickadees also occur in the Animas Mountains of New Mexico but the Animas are privately owned and not easily accessible, so most birders go to the Chiricahuas to get their ABA area Mexican Chickadee.) We did hear an Olive Warbler but we dipped on the chickadee. Apparently the chickadees are busy nesting in April and May and can be hard to find then. I’m also guessing they were hit hard by the Horseshoe Two Fire in 2011, so there are probably fewer of them. Mexican Chickadee was one of our target birds but neither of us needed it for a lifer, so it wasn’t a huge miss. Despite its attractiveness we only birded Barfoot once because the road up to Barfoot is narrow, winding, and uneven, and my Honda Civic protested the whole way up and back down. The state of Arizona refers to this type of road as “unimproved”, which translates to “not fit for low clearance vehicles”. 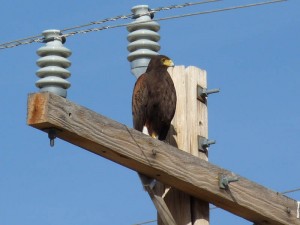 On April 26, our last day in Arizona, we bid the Chiricahuas goodbye and drove to Wilcox to check Lake Cochise for shorebirds. Lake Cochise is actually a waste water pond and was named after the Chiricahua Apache chief and resistance leader Cochise. I wonder how Cochise would feel about having his name attached to a waste water pond. Lake Cochise proves the adage that water is life in the desert, even untreated waste water. The ponds were full of shorebirds, including hundreds of Wilson’s Phalaropes, American Avocets, Willets, Western Sandpipers, and a few Long-billed Dowitchers. There were waterfowl too, mostly Northern Shovelers and Ruddy Ducks but also American Wigeon and Gadwall. Rounding out the list were a couple White-faced Ibises, an immature Bonaparte’s Gull, and a covey of Scaled Quail.

I spent a little over an hour at Montrose Beach this morning, hoping for large shorebirds, especially the kind with long recurved or decurved bills. The only shorebirds I saw were a flyby Ruddy Turnstone, a couple Semipalmated Plovers, a Spotted Sandpiper, and a few Sanderlings. The morning wasn’t a complete bust however. Around dawn a Merlin flew in off the lake with something in its talons. This is my first Merlin of the season at Montrose. I also had about 15 adult Common Terns fly south over the beach. They were coming by in small groups and never landed. A juvenile Forster’s Tern made an appearance too.