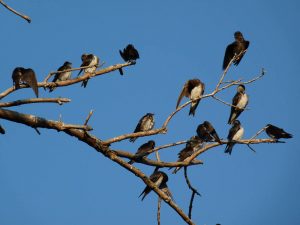 Migrant Purple Martins once gathered by the thousands in late summer and early fall at Montrose. It was quite a spectacle, reminiscent of a scene from Hitchcock’s “The Birds”. For unknown reasons the large numbers stopped using Montrose and the spectacle is a thing of the past. The Purple Martins we see anymore are mostly the local breeders. I photographed these birds at Montrose Harbor on August 1, 2016.