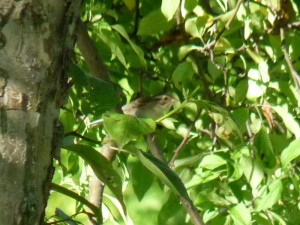 The Curve-billed Thrasher was obviously the big story at Montrose today but there were a few other birds of interest. Late this afternoon I had 6 Semipalmated and 1 White-rumped Sandpiper inside the protected area at the east end of the beach. This might be the latest spring White-rumped I’ve ever seen. Also, the continuing female Red-breasted Merganser was inside the harbor.

Montrose regular Luiz Munoz found a Curve-billed Thrasher (Toxostoma curvirostre) near the Magic Hedge on Wednesday, June 18. The bird was seen and photographed by many, and as of June 22 is still present. Curve-billed Thrashers are normally found in the southwest United States and northern Mexico, though they do wander and there are extralimital records for several Midwestern states. This is just the second Illinois record of this species, the first coming from Rend Lake in December, 1992, as well as the 338th species recorded from Montrose.

To see a list of the birds that have been recorded at Montrose, please refer to the Birds Recorded at the Montrose Point Area in Chicago page.