Part two of a six part series on my trip to the west and southwest in April, 2014

Before the trip I did some research and found a place just east of Gunnison, Colorado for viewing Gunnsion Sage-Grouse. The birds display in a meadow that can be viewed from a pull-off on the side of a road. The pull-off is free and open to the public (though the meadow the birds use is on private property), and viewing them involves following the same protocol as viewing the Lesser Prairie-Chickens we missed in Kansas, except that you use your vehicle as a blind. Seems fairly easy and straightforward but after missing the Lesser Prairie-Chickens I was a bit apprehensive.

We left Gunnsion early on the morning of April 17 and made our way to the Gunnison Sage-Grouse viewing area about 20 miles to the east. We arrived in the dark, parked, and waited. A car pulled up behind us a few minutes later. I thought it was another birder but it turned out to be a volunteer with Colorado Parks and Wildlife, whose job was to answer questions about the grouse and to make sure visiting birders follow the protocol for viewing the birds, i.e., staying in your vehicle, keeping quiet, and not leaving until the birds disperse. So we waited for the birds to appear and kept quiet. 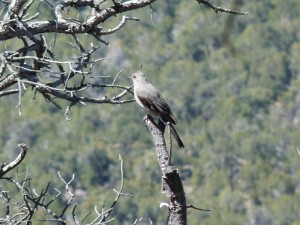 At first light we noticed some movement in the distance, perhaps 200 yards away and directly to the east of where we were parked. It was still fairly dark but we could tell that they were Sage-Grouse and they had started to display. I moved over to the passenger side seat of my car and Karen got in the back so we could each have a window to view the birds. Our bins just weren’t strong enough to see the birds well, so we took turns using Karen’s 30x Kowa telescope to get better looks at them. I don’t have a window mount so we rested the scope on the half opened windows for stability. Using the telescope made a world of difference and we could tell the birds were Gunnsion Sage-Grouse and not just Sage-Grouse. There were 8 birds, 4 males and 4 females. Most of the females were concentrating their attentions around one male, which is typical lekking grouse behavior. The displaying continued until about sunrise and then abruptly stopped and the birds remained motionless for the next 20 minutes or so. About a half an hour after sunrise the whole group got up and flew hard and fast to the west, over the road we were parked on and in front of us and disappeared into the sage covered hills on the other side of the road. Success and our first life bird of the trip.

After seeing the grouse we started driving west through Colorado. On the map I noticed a large body of water just outside of Gunnison and right along our road called Blue Mesa Reservoir. I thought that any sizable body of water up here might have birds, and it did. There were lots of dabbling and diving ducks, including Green-winged and Cinnamon Teal, Gadwall, American Wigeon, Northern Shovelers, Lesser Scaup, Ring-necked Ducks, Redheads, and Common and Barrow’s Goldeneyes. We also had a few Western Grebes, a Common Loon, Franklin’s, Bonaparte’s, and Ring-billed Gulls, and our first of many Black-necked Stilts of the trip. There were also singing Sage Thrashers around the road into the reservoir. Nice.

Just west of Blue Mesa Reservoir is Black Canyon of the Gunnison National Park. When I was planning the trip I did some research and discovered that it had Dusky Grouse, or so I read, and I still needed Dusky Grouse. I didn’t think our chances of seeing them were very good but it was on our route and I thought it might be worth checking, so we did. And it was worth it. The spectacularity of this place can’t be described with words, and the photo below doesn’t do it justice. It has to be visited to be experienced. The sheer cliffs dropped maybe 2000 feet straight down to the Gunnison River below. I stood at the edge of an overlook and almost got dizzy. Definitely not a place for folks who are afraid of heights though.

We didn’t see any Dusky Grouse but there were birds to be seen. White-throated Swifts zoomed by, sometimes below eye level. A Peregrine Falcon was working the canyon. Hiking the trails yielded a Golden Eagle, several Western Scrub-Jays, Townsend’s Solitaire, Mountain Chickadees, Red-breasted Nuthatches, a Bushtit (our only Bushtit of the trip), and a few other things. We didn’t see anything unexpected for this part of Colorado, but being from Chicago almost all of these birds were exciting. The scenery was worth the price of admission too. 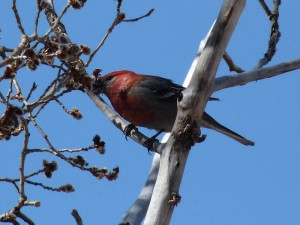 After Black Canyon we started heading west again. At Montrose we picked up 550 and began driving south towards New Mexico. The scenery was something to behold. I’ve been to Colorado before but not enough to get bored with looking at mountains. The stretch from Ouray to Silverton was especially dramatic, with snow covered peaks like you’d see in a travel brochure or commercial. I concluded that Colorado wasn’t cheated when it comes to scenic beauty. The birding was a little slow though, as would be expected for mid April in the high Rockies. Black-billed Magpies and Common Ravens were the most common birds, with a few Mountain Bluebirds and Says Phoebes thrown in for color. Near Ouray we drove up a Forest Service road for a couple miles just out of curiosity and had Mountain Chickadees, Red-breasted Nuthatches, a lone Clark’s Nutcracker, and a Pine Grosbeak. We had more Pine Grosbeaks near Silverton.