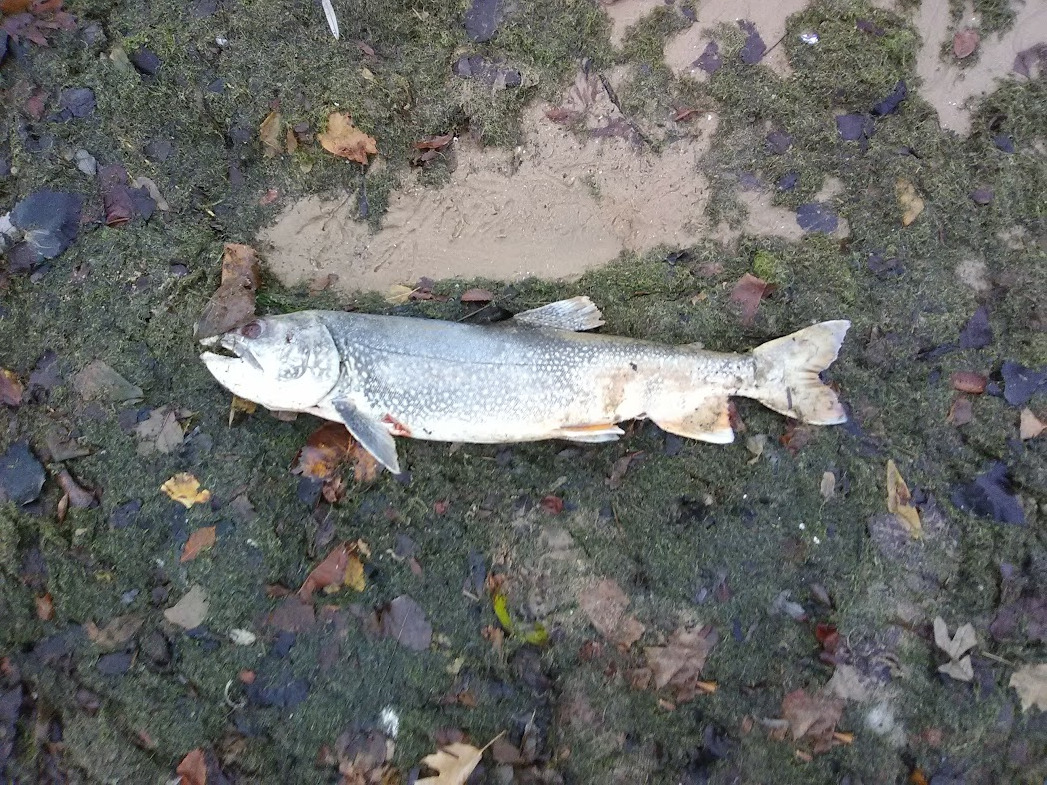 Ah, there’s nothing like seeing a dead fish to lift the spirits. I usually don’t post photos of deceased animals but this one is worth mentioning. On November 29, 2022 I found a washed-up Lake Trout (Salvelinus namaycush) on Montrose Beach. This might be the first Lake Trout I’ve seen at Montrose. Most of the large predatory fish in Lake Michigan are non-native and introduced, like the familiar Chinook and Coho Salmon. Lake Trout were once the dominant large predatory fish in the Great Lakes; lamprey predation, pollution, and overharvesting greatly reduced their numbers. Thanks to conservation measures, they’ve rebounded but they aren’t as common as they once were.

Identification: We know this is a Lake Trout and not an introduced salmon because of the small white spots on the body and the deeply forked tail. Our non-native salmon have dark speckling on their bodies and shallower tail forks. 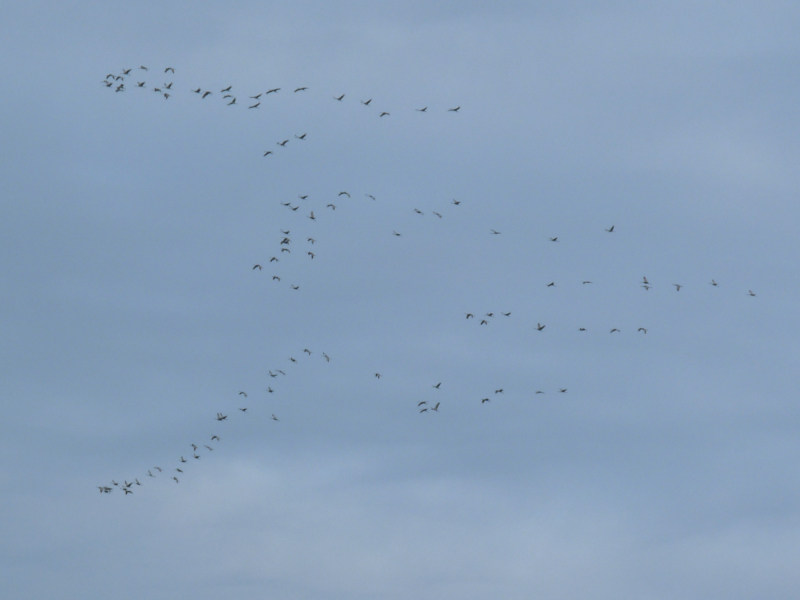 Sandhill Cranes over Montrose (click to see the larger version)

Thousands of Sandhill Cranes migrated over Chicago on November 18 and 19. This is an annual occurrence in late fall when we get intense cold fronts and brisk west winds. These conditions are necessary to force them south out of Wisconsin and east as far as the city. Birders throughout Chicago and northeastern Illinois were reporting big numbers, as well as a few rarer Whooping Cranes. Several hundred Sandhills made it to Montrose, which is unusual, and a testament to how strong the winds were. The Sandhill Cranes in the photo flew right down the Lake Michigan shoreline and over Cricket Hill on their way south.

eBird makes it easy to add written details to your bird sightings – just click the Add Details button to the right of the species name when you’re entering bird sightings. This opens up a field where you can enter as much text as you like. eBird strongly encourages you to provide details about rare birds. This extra information helps eBird reviewers determine the validity of a rare bird. Diagnostic photographs are the best evidence, but if you don’t have photos the next best option is to provide a good, detailed written description. A good description should include field marks that confirm the identification and eliminate similar species. For example, say you saw a female Hooded Warbler at Montrose in November. A Hooded Warbler in November is rare and unexpected and would trip the eBird filters. Writing something like “It looked like the picture in the book” or “It was hopping on the ground” aren’t very helpful to eBird reviewers. A better description would be “Female. A warbler with unmarked green wings and back, unmarked yellow underparts, yellow face with a black rear border, and prominent white tails spots”. This is enough information to eliminate other species. The key is to include field marks you noted in the field. eBird reviewers will appreciate your attention to detail. 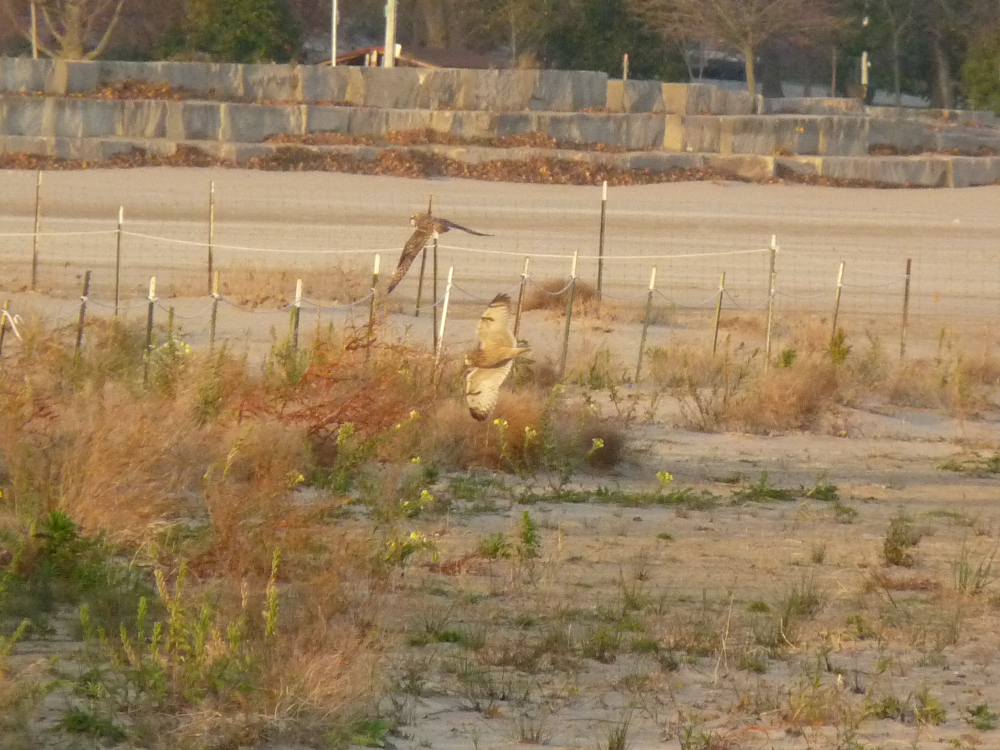 If you were lucky enough to be at Montrose Dunes on the morning of November 10, you were treated to a dazzling aerial display of Short-eared Owls. Up to 5 were swooping, circling, and floppy flying over the Dunes and Lake Michigan. Most eventually settled down in the Dunes and disappeared from sight. This is about as many Short-eareds as we see at one time at Montrose. It’s also a reminder that November is an excellent month for owls. More photos of this morning’s Short-eared Owls are at my eBird checklist, URL below. 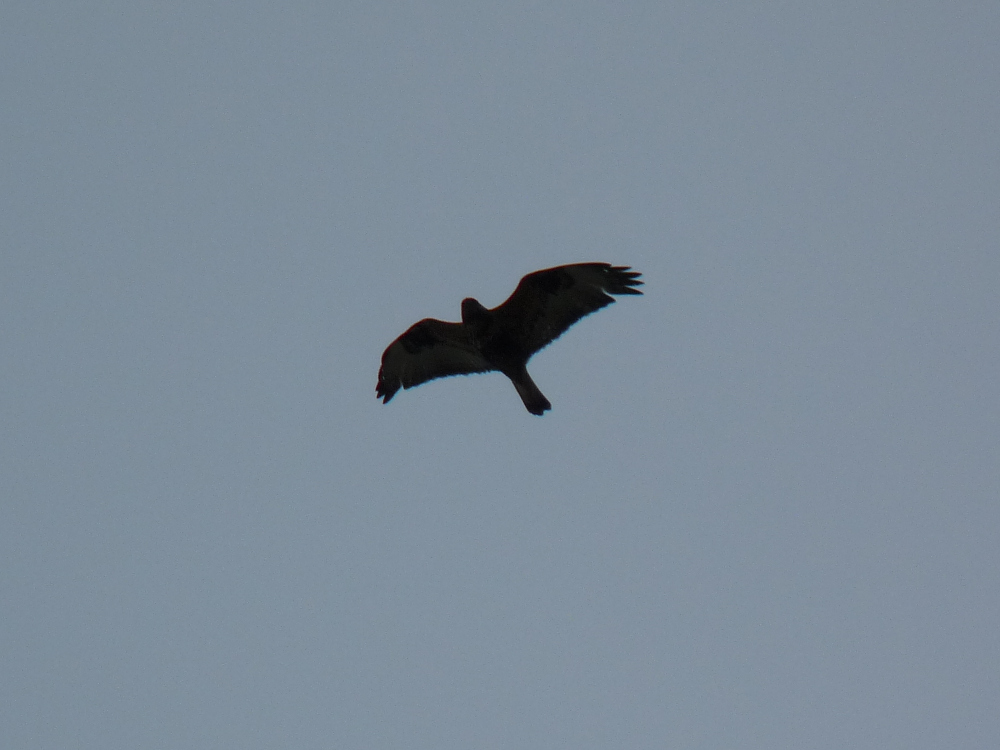 Two Rough-legged Hawks flew over Montrose on November 9. What’s interesting is that conditions weren’t favorable for hawk migration – overcast skies, light rain, and breezy south winds. Montrose is known for many things birdwise but we don’t do well with migrating buteos. Reasons for this discrepancy could be a lack of birders looking up for hawks and our proximity to Lake Michigan, which may scare away migrating buteos. Rough-legged Hawks aren’t intimidated by large bodies of water, which, oddly, may be the reason why we see more of them in active migration than other buteos, though they’re still rare.