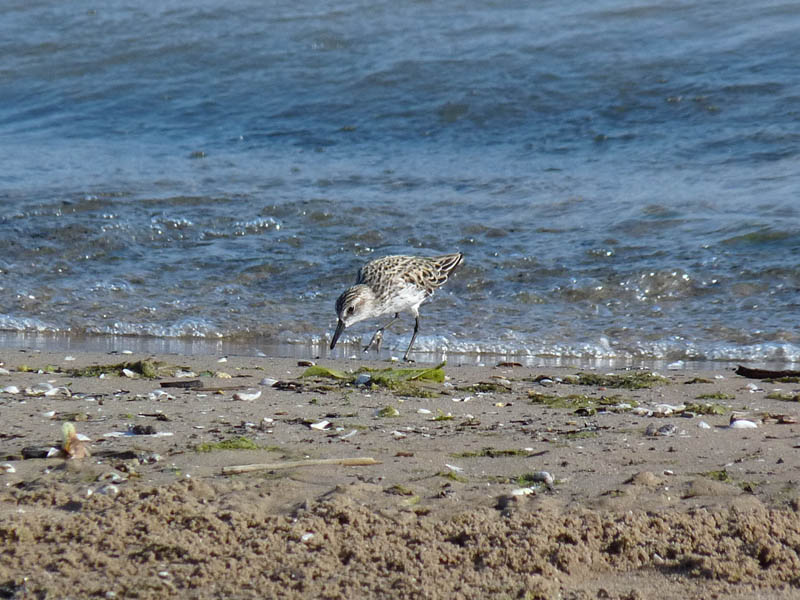 We’re in the gray area for shorebird migration. The first southbound shorebirds should start appearing any day now (Least Sandpipers and Lesser Yellowlegs) if they haven’t appeared already, but a few shorebirds could still be moving north. This morning, June 24, I saw a Semipalmated Sandpiper at Montrose Beach. I tend to think this bird is a very late northbound migrant as opposed to a very early southbound migrant. We see Semi Sans regularly at Montrose well into June; I think this bird is at the tail end of that trend.

This is why it pays to keep birding in June (and why it also pays to track down complaining blackbirds).

I was at Montrose on June 7, looking for late migrants and any oddball birds that might show up. Montrose holds late migrants better than most places and I try to keep birding it until the second week in June or so. At about 8:00 a.m. I heard some Common Grackles and Red-winged Blackbirds making a major league ruckus over something in the trees not far from where I was. I walked over to where they were, expecting to see a Cooper’s Hawk or something else mundane. When I scanned the trees where the blackbirds were I saw a Barn Owl, looking very agitated. I took a few photos, admired the bird for a bit, and walked away. The blackbirds were mercilessly harassing the owl and I didn’t want to stress it any further. After a few minutes, I stopped hearing the blackbirds complaining, so I don’t know if the owl settled in or flew off to calmer pastures. This is about the 5th Barn Owl I’ve seen at Montrose in the 40 years I’ve been birding there.

The Barn Owl was the highlight today but there were also a few late migrants, mostly flycatchers and shorebirds. See my eBird checklist below for details.