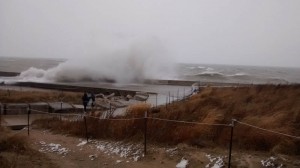 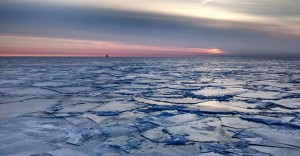 Sunrise Over Lake Michigan (click to see the larger version)

A nice, icy sunrise over Lake Michigan. The birding this winter has been unimpressive, but the sunrises haven’t. 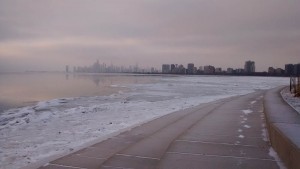 I walked around Montrose for a little bit this morning, February 16. It looked more like winter today than any other day I’ve been out there this winter, with ice on the lake all the way to the horizon, east, north, and south. The ice wasn’t continuous and there were scattered patches of open water here and there. In these patches were Common Goldeneye and Common Mergansers, the typical Lake Michigan winter ducks. Best were 4 White-winged Scoters that flew in and joined the other waterfowl offshore. I haven’t seen many White-winged Scoters this winter and this is the time of the year when they start to appear in numbers. Perhaps the relatively mild winter and lack of extensive ice on the lake have something to do with this. I saw nothing else of note.