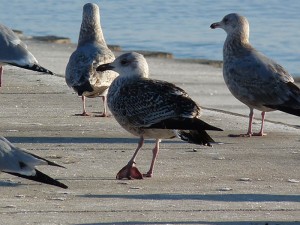 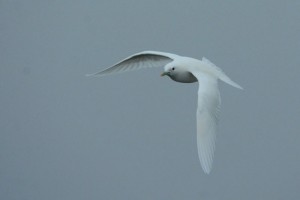 After getting off to a late start Karen and I arrived at Lock and Dam 21 at 3:00 on the afternoon of January 3, 2015 to look for the adult Ivory Gull found a couple days earlier by local birder Jason Mullins. I didn’t need Ivory Gull for anything, having seen the 1991/92 Chicago bird and several others in Iowa and Wisconsin, but Karen needed it for a lifer, so we decided to make the long trek to Quincy, Illinois to look for the bird after reading that it was seen that morning. I was also reluctant to go because of the inclement weather and forecast poor road conditions, but the only precipitation we encountered was liquid, so the roads were just wet and not icy as I had feared.

At about 4:00 a fellow from Kansas spotted the bird standing on a small ice floe about a mile up river and probably in Missouri waters from where we were at the lock and dam. We could tell it was little Pagophila but we wanted better looks so we got in our cars and raced north. Just south of the bridge we saw a group of birders with scopes standing in a parking lot next to the river and when we got closer one of them pointed out over the river, so we knew they had the Ivory Gull. After some fumbling around we were able to get on the bird with our scopes, though it was still a long way off. We watched it preen and bath and nearly become a meal for a couple Bald Eagles (there are a lot of Bald Eagles around Quincy). We didn’t have the same mouth watering looks that others had but we saw the bird reasonably well and Karen got her lifer and I got my second Illinois Ivory Gull.