Part five of a six part series on my trip to the west and southwest in April, 2014

On April 26 I dropped Karen off in Lordsburg, New Mexico so she could begin her Continental Divide Trail hike. The road to the trailhead for the CDT is unimproved and not suitable for anything except a high clearance SUV or tank, which my Honda Civic isn’t, so Karen would have to take a shuttle to get to the trailhead. The shuttle is sponsored by the CDT Coalition and transports hikers to the trailhead from Lordsburg several times a week during hiking season. The trailhead itself, at the Crazy Cook Monument, is on the New Mexico and Chihuahua, Mexico border. The monument was named after a cook who apparently killed someone at or near this spot in the 19th century. 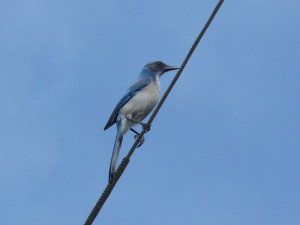 After dropping Karen off I started driving east through New Mexico on Interstate 10, the southernmost transcontinental highway in the American Interstate Highway System, running from California to Florida. I was in a hurry to get to Texas and I had a long drive ahead of me, so my birding was limited to what I could see from my car. The habitat on this drive was fairly monotonous, and except for Turkey Vultures, White-winged Doves, Western Kingbirds, and ravens I didn’t see much in the way of bird life.

Just after I entered Texas from New Mexico I saw a sign on the side of the road that read “Beaumont 840 miles”. Beaumont is at the other end of Texas and my heart sank a little as I realized I would have to drive every one of those 840 miles to get through it. I’ve driven the lengths of North and South Dakota, Nebraska, and Kansas, but driving from one end of Texas to the other would make driving those other states seem like a walk across the street. The birds in western Texas were similar to what I had just experienced driving through New Mexico, i.e., Turkey Vultures, White-winged Doves, Western Kingbirds, ravens, and not much else. Near Fort Stockton I started to see Cave Swallows flying around highway bridges. I hadn’t seen Cave Swallows in a long time so this was a treat. At one bridge a swarm of Cave Swallows came pouring out in protest when I started pishing. Who knew that pishing would work on swallows. Just east of Sheffield I checked a canyon mentioned in “A Birder’s Guide to the Rio Grande Valley” that was supposed to have Gray Vireos. After a little exploring I heard a Gray Vireo singing and after a foot chase I saw the bird reasonably well. Gray Vireo was another bird I hadn’t seen more than a couple times so I was thrilled, even if the look wasn’t stellar.

On the morning of April 27 I birded Lost Maples State Natural Area near Vanderpool. Lost Maples is a gem of a birding place and turned out to be one of the highlights of my trip. I haven’t been to Lost Maples in a long time so my memory of it was foggy at best. As I drove into the park I rolled my windows down and was overwhelmed with a dawn chorus of birds as impressive as any dawn chorus I’ve experienced in the Midwest. Dominant were White-eyed Vireos, Indigo Buntings, Blue-gray Gnatcatchers, and Summer Tanagers. I also had Eastern Wood-Pewees, Ash-throated and Acadian Flycatchers, Carolina and Canyon Wrens, Hutton’s and Yellow-throated Vireos, and Blue and Western Scrub-jays, for a nice mix of eastern and western birds. I heard far more than I saw, which is typical of most dawn choruses. The star attractions of the park however are the Black-capped Vireos and Golden-cheeked Warblers that nest almost side by side. I heard 7 or 8 Black-capped Vireos but saw only 2. They really are shy little birds and if they don’t want to be seen they won’t. I had better luck seeing Golden-cheeked Warblers, and a pair actually came in to investigate my pishing. I also had a Zone-tailed Hawk, a bird I missed in Arizona. Wonderful place, Lost Maples is.

After Lost Maples I took a spin through the Texas Hill Country on my way to San Antonio. There were lots of Scissor-tailed Flycatchers, Western Kingbirds, and Northern Mockingbirds along the roadside, and several Crested Caracaras flying around. Fun birding.

Montrose was very birdy this morning, September 26. I hadn’t been there in over a week but I was impressed with the number of warblers around. Dominant among these were Tennessee, Blackpoll, Yellow-rumped, and Palm. I also had a couple of Northern Parulas and a male Black-throated Blue Warbler, all in the Magic Hedge. Other birds of interest this a.m. include my first Hermit Thrush of the season, a flyover American Pipit at the beach, a calling Sedge Wren in the dunes, and 5 flyover American Golden-Plovers at the beach. I didn’t have any Nelson’s Sparrows in the dunes but this is prime time for them.

I spent a couple hours at Montrose this morning, September 13. Given the cold air and northwest winds I was expecting a great day but the birding was fair at best. I ended up with 14 species of warbler, the most common of which were Tennessee, Blackpoll, Palm, Magnolia, and American Redstart. Thrushes, flycatchers, and sparrows were scarce. Here’s my partial list:

All of the swallows were seen together. They were feeding over and around the pine trees near the lake. 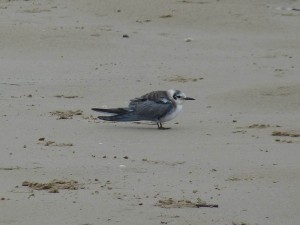 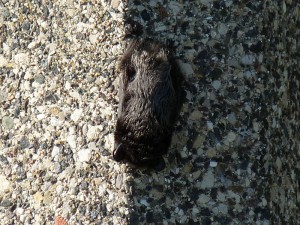 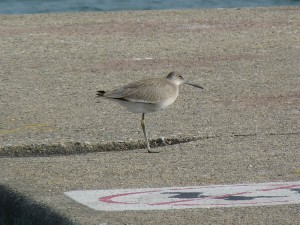 A juvenile Willet was at Montrose Beach on September 4. I first saw it on the beach just outside of the protected area but a jogger came along and the bird flushed and landed on the end of the fishhook pier. It’s getting late for Willets.