I spent about an hour and a half at Montrose this morning, mostly looking at the lake and checking the harbor. I thought there might be migrating waterfowl, loons, and grebes, but there was very little movement on the lake. Migrant passerines were almost non-existent. I did see a few interesting birds though. Here’s my partial list: 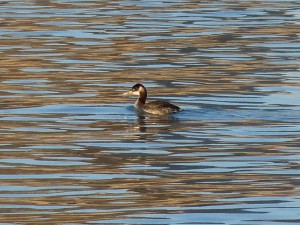 Other birds seen at Montrose this a.m. include Greater and Lesser Scaup and Redheads in and around the harbor, several White-winged Scoters off the end of the fishhook pier, and Horned Grebes. 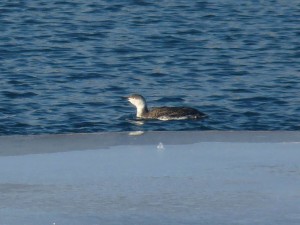 This is beginning to sound like a broken record. Lake Michigan was ice covered from horizon to horizon but there were a few areas of open water and these open areas had birds. Best was probably the Red-throated Loon at the harbor mouth. Unfortunately the bird flushed when a fisherman walked onto the north pier. This must have been one desperate fisherman as there was barely enough water to fish in. There were also a dozen or so White-winged Scoters and a drake Long-tailed Duck here.

A larger group of ducks (100-150 birds) were in the lake a couple hundred yards north of the end of the fishhook pier. I didn’t have my scope but most appeared to be scaup, White-winged Scoters, and mergansers. Another small pool of water south of here held more White-winged Scoters and 2 Long-tailed Ducks.

A few ducks are hanging on in the ever decreasing water hole near the bend of the point. It’s really a sad sight. There were probably more birds standing on the ice around the hole than actually in the water, and there were multiple dead ducks scattered around.

Finally, I heard a Snow Bunting flying over the beach. 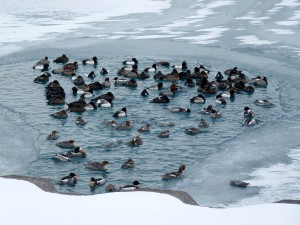 Waterfowl trapped by ice (click to see the larger version)

I went over to Montrose this morning, March 4, to see what was around. There were a couple very small areas of open water along the shore, one at the harbor mouth and the other near the tower at the bend of the point. Both areas had birds, mainly White-winged Scoters, Greater Scaup, Redheads, Common Goldeneye, and Red-breasted Mergansers. The open area near the tower was all of about 10 feet in diameter and crammed with birds. The situation looked desperate and reminded me of when whales get trapped in small areas of open water surrounded by ice in the Arctic. Lake Michigan was frozen from horizon to horizon, though there was a decent sized lead just east of the fishing pier. I couldn’t figure out why the ducks that seemed to be trapped didn’t just get up and fly a few hundred yards to the larger area of open water. Maybe they were afraid of losing their places or leaving the safety of what little open water they thought existed. When I was walking back from the fishing pier I did see a group of scoters flying from the small area of open water near the tower to the lead, so some of them figured it out. I also saw several dead ducks on the ice which I guess shouldn’t be surprising considering the conditions.