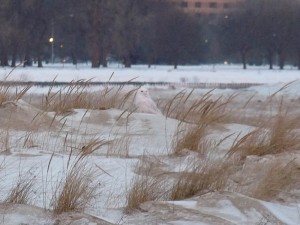 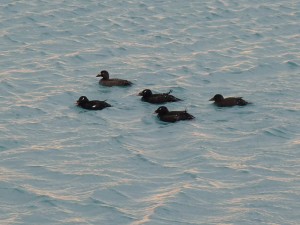 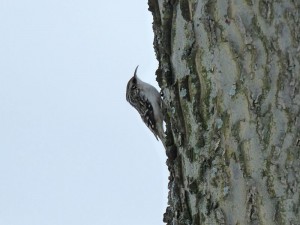 Karen and I were feeling adventurous today so we decided to walk over to Montrose for a change. I live about a mile from Montrose and I almost never walk over there anymore. The theme for the day was ice and snow everywhere, and not many birds to be seen. Except for a few open patches of water, Lake Michigan was iced over as far as we could see.

Our birding highlights were a surprise Brown Creeper working a hackberry tree in the Marovitz golf course and a dazzling adult male White-winged Scoter swimming in a very small area of open water at the harbor mouth. We also saw a few Greater Scaup, a Fox Sparrow near the Magic Hedge, and good numbers of American Robins feeding in hawthorns near the beachhouse. 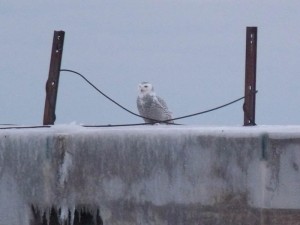 I thought the Snowy Owl parade was over at Montrose but this morning I saw a heavily marked individual on the fishing pier. The bird was initially near the beach but flew down and landed on the ice inside the fishhook part of the pier. As I was leaving I checked the pier again and the bird was back up on it near the light tower. This is the first Snowy Owl I’ve seen at Montrose in several weeks and the first of the year.

I walked around Montrose for a little while this morning. There wasn’t a lot around, as is expected for mid January, but I did see 2 Snow Buntings on the beach inside the protected area and a White-winged Scoter just outside the entrance to the harbor. The scoter was right up against the rocks with a group of Mallards. I saw nothing else of note birdwise, though the ice formation on the beach is rather striking.

I was surprised to see 4 Snowy Owls at Montrose this morning. I thought most had left but it appears more came in to replace them. Two were on the fishing pier, one was on the ice shelf at the west end of the beach, and the other was flying south over the point, almost like it was migrating. I also saw an adult or near adult Glaucous Gull flying north, the Snow Goose in the harbor, and 4 Snow Buntings and a single Lapland Longspur on the beach.