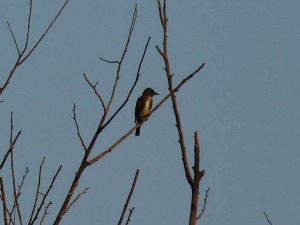 I walked around Montrose for a little while this morning. I didn’t see any unusual shorebirds (a Buff-breasted Sandpiper was seen on 8/29) but there was activity around the water feature and Magic Hedge. Best was an Olive-sided Flycatcher that moved between the water feature and adjacent Honey Locusts. I also had a Yellow-billed Cuckoo, Eastern Wood-Pewee, Least Flycatcher, Ruby-throated Hummingbird, a couple Swainson’s Thrushes feeding on mulberries in the Magic Hedge, Tennessee Warbler, and American Redstart. 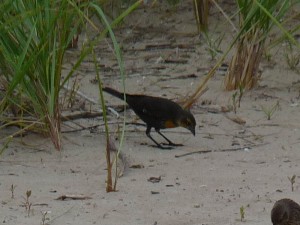 Two Whimbrels flew over the east end of Montrose Beach this morning. This was about 6:30. They continued southeast over Lake Michigan and didn’t act like they were going to stop or come back. This is prime time for Whimbrels along Lake Michigan.

Other birds seen at Montrose Beach this a.m. include 9 Semipalmated Plovers, 2 Baird’s Sandpipers, a Lesser Yellowlegs, 2 Sanderlings, single Least and Semipalmated Sandpipers, and a group of about 8 Forster’s Terns.

I went back out in the afternoon and had a Lark Sparrow in the native planting area near the tower. This was most unexpected as Lark Sparrows are very rare at Montrose in the summer and fall.